Spring Framework was created as a result of disappointment of Java community with earlier versions of Enterprise Java. Since then it has grown into huge ecosystem that allows one to solve every problem in building a Web-based Java application and more. Spring is often criticized because it used to rely on XML for configuration purposes. As a response to that the Spring Boot framework was released, which relies on convention over configuration principle and can do without XML at all.
In this tutorial series we’ll go over how to create an application using Spring Framework and Spring Boot. While Spring Boot allows one to create an application faster, Spring is widely used today in enterprise environment and even by startups, so knowing Spring is definitely a marketable skill, and also learning it can provide one with the insight how Spring Boot works. The code for a simple Spring Framework application can be found here and the Spring Boot version here. 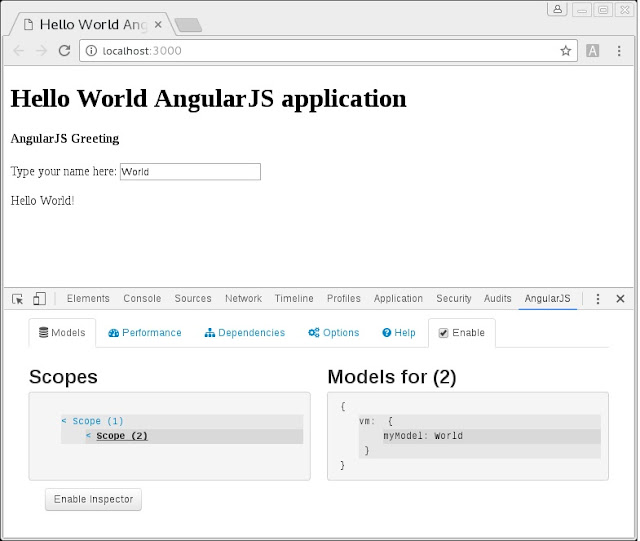 Introduction to AngularJS Controller As Syntax
In the previous installment of this series we discussed scopes and what problems nested scopes can cause. There are a couple of solutions to this problem: the so-called Controller As syntax introduced by AngularJS 1.2 and .component() method introduced by AngularJS 1.5. The latter option is a recommended way to go if you are thinking about upgrading your application to newer Angular versions. In this post we’ll talk about AngularJS Controller As syntax.
As was mentioned previously, when we instruct Angular to use a controller with the ng-controller directive, a new instance of a controller and a child scope is created. Alternatively, the same directive but with a different syntax can be used to create a controller and to attached it to a newly-created scope as the snippet below shows.

The differences are that, first, in the ng-controller directive we not only pass the name of the registered controller, but also, a variable name for an instan…
Post a Comment
Read more 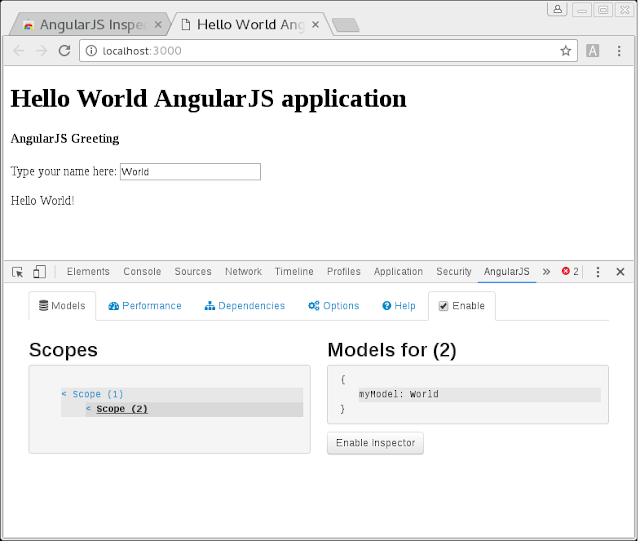 In the previous tutorial of this series we learned how to test controllers using Jasmine and Karma. In this post we discussed how data is passed from controller to view using $scope, which is the glue that links model and view. In this tutorial we’ll talk more about scopes, what are some possible pitfalls in using them, and later we’ll talk about the ways to overcome possible problems, as well as get over Batarang, a Chrome extension from AngularJS team, which can be used to analyze scopes inside an AngularJS application.

By adding the ng-app directive to some HTML tag we specify that an AngularJS will be created and in the process of application creation Angular creates the so-called root scope. Some other directives such as ng-controller create a child scope. To visualize scopes one can use a Google Chrome extension called Batarang. The picture below shows the root scope for the AngularJS application and the child scope created by HelloController, whic…
Post a Comment
Read more
More posts

javaeeeee
Dmitry Noranovich has been programming since 1993 when he learned C language to produce code to carry out computations for his research. Since then he has used C++ and Java for this purpose and as well taught an extracurricular computational physics course in a big university in south Russia. His experience also includes teaching general physics at university level. Besides Java, which is his primary programming language, Dmitry is dabbling in Angular.js and Bootstrap and is passionate about everything concerning REST APIs. Dmitry is a technology enthusiast and lifelong learner, so he periodically takes MOOCs in computer science and likes to think that someday he will produce one and also tries to learn something new on his own. When he doesn't work, he spends time with his wife and two kids. Should he have spare time, he prefers to spend it hiking or with his Kindle. Dmitry teaches a Getting Started with Dropwizard course on Udemy (https://www.udemy.com/getting-started-with-dropwizard/?couponCode=blog10).